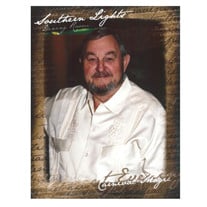 Thomas Franklin Olds, 77, of Silex, Missouri, went home to the Lord, surrounded by his family on Friday, August 5, 2016 at Barnes Jewish Hospital. He was born on May 1, 1939 in Piggott, Arkansas and was the son of the late O.T. and Edna L. (Sneed) Olds. Thomas married his high school sweetheart Joyclyn Bricker on July 12, 1958 in Piggott, Arkansas and to this union three children were born. Thomas served his country in the United States Marine Corps and was honorably discharged. He owned and operated Olds Construction and was a member of the Carpenters Union Local # 47. Thomas then started his next journey with Automatic Systems as a Millwright out of Kansas City, MO. As a superintendent, he did some extensive traveling for over 15 years, including: Canada, Australia, Old Mexico, Saudi Arabia and installed the heavy conveyor systems mainly in automobile plants, East of Mississippi from North to South. He was a true Christian man, who was a Deacon within his church in Olney. Thomas served the Lord by building and remodeling churches for a great group called “The Master Builders,” Raising Roofs for Christ. The family raised many hogs over the years that won several champion and reserve champions. He was a 4-H swine leader and major supporter of the local 4-H and FFA. Thomas was a family man and was very close to his grandchildren, he shared many memories with them taking trips to the Old Threshers in Iowa, riding laps around the yard on the golf cart and the lifesaving trip for his granddaughter, Courtney Carroll to the John Hopkins Hospital. He had that gentle touch, soft heart and the big ole chest that all of his grandchildren loved for nap time, well he enjoyed a nap too. He is survived by his loving wife of 58 years, Joyclyn Olds of Silex; one son, Timothy Ray Olds and wife Sandy of Silex: two daughters: Tami Carroll of Conroe, TX and Yvonne Korman and husband Matt of Rhineland; 7 grandchildren: Courtney Carroll, Moriah Carroll, Justin Nolte (Erica), Jess Nolte, Jake Nolte (Sarah), Heather Olds (Allen) and Harlee Olds; 4 great-grandchildren: Kylie Orlando, Myla Grace, Maxin Nolte and Alayna Nolte; one brother, James W. Olds of OK; numerous relatives and many friends. He was preceded in death by his parents and one brother, Timothy Raymond Olds. Friends will be received from 4:00 p.m. to 8:00 p.m. Monday, August 8, 2016 at KEMPER-MILLARD-KEIM Family Funeral Chapel, located at 41 Farm Lane Hawk Point, MO 63349. Funeral service will be held at 11:00 a.m. on Tuesday, August 9, 2016 at the KEMPER-MILLARD-KEIM Family Funeral Chapel, located at 41 Farm Lane Hawk Point, MO 63349. Interment will be held at the Olney Cemetery. Expressions of sympathy may be made to the Olney Baptist Church or to the American Heart Association, under the direction of Kemper-Millard-Keim Family Funeral Chapel P.O. Box 222 Troy, MO 63379. Online condolences may be made at www.kempermillardkeimfamilyfuneralchapel.com (636) 338-4375.

Thomas Franklin Olds, 77, of Silex, Missouri, went home to the Lord, surrounded by his family on Friday, August 5, 2016 at Barnes Jewish Hospital. He was born on May 1, 1939 in Piggott, Arkansas and was the son of the late O.T. and Edna L.... View Obituary & Service Information

The family of Thomas Franklin Olds created this Life Tributes page to make it easy to share your memories.

Thomas Franklin Olds, 77, of Silex, Missouri, went home to the...

Send flowers to the Olds family.