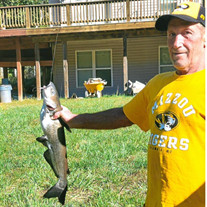 Timothy “Tim” Michael Modglin, 61, of Wright City, Missouri, passed away on Monday, April 18, 2022 in Wright City, Missouri. He was born on July 25, 1960 in St. Charles, Missouri a son of the late Dameon D. and Patricia Ann (Sinclair) Modglin. Tim was a Tile Setter for Tile Unlimited, working for his brother’s company. He was an outdoor enthusiast, who enjoyed shooting guns and fishing. Tim liked watching sports especially, football. He had a big heart, who would give the shirt off his back. Many people had his back and showed tough love to Tim over the years. Tim is survived by his three sons: Dylan Modglin of Wright City, MO, Jordan Modglin of St. Charles, MO and TJ Modglin of St. Louis, MO; two brothers and one sister: Martin “Butch” Modglin and wife Kathy of Warrenton, MO, Mark Modglin of Wright City, MO and Nina Brooks of TN; one grandson, Max Modglin; former wife and love of his life, Therese Palmer; his best friend, Brandon Lively of St. Charles, MO; nieces, nephews, cousins and friends. He was preceded in death by his father and mother: Dameon and Patricia Modglin. Services will be held at a later date. Expressions of sympathy may be made The Family of Timothy “Tim” Michael Modglin in care of Kemper-Keim Family Funeral Chapel P.O. Box 222 Troy, MO 63379. Arrangements are under the direction of Kemper-Keim Family Funeral Chapel; 351 Monroe Street, Troy, Missouri 63379. Online condolences may be made at www.kemperkeimfamilyfuneralchapel.com Phone 636-528-8221

The family of Timothy "Tim" Michael Modglin created this Life Tributes page to make it easy to share your memories.

Send flowers to the Modglin family.