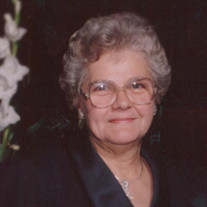 Vera Ellen Rudolph was born in Chicago, Illinois on August 24, 1930. She was the daughter of Charles Boehning Rudolph and Ruth Harrison Rudolph, who were long-time residents of Troy and who preceded her in death. She had two sisters, Marion Williams (deceased) of Troy and Anna Nienhueser of Bowling Green, MO. Vera married Kenneth Clare Shafer of Troy on August 24, 1949. Together they had four children, Michael (married to Debi), who preceded his mother in death, Mark, Brian (married to Jill) and Carol (married to Sean Walsh). Vera was blessed with eleven grandchildren including Greg Shafer (married to Nicole), Benjamin Shafer (partnered with Jay), Tassi Womack (married to A.J.), Robert Shafer (married to Abby), Tiffani Shafer , Justin Shafer, Sarah Shafer, Shannon Walsh, Jesse Shafer, Iris Walsh and Joshua Walsh. In addition, Vera has two great granddaughters, Shelby and Chloe Shafer, plus one on the way. Vera graduated from high school in Troy and studied for one year at the University of Missouri-Columbia. She returned to college in later years and received her Associates Degree in Nursing from St. Mary’s College in O’Fallon, MO in 1976. She practiced both medical surgical nursing in a hospital setting and home health nursing throughout her career. She was a long time member of Troy Presbyterian Church and in more recent years a devoted member of the First Christian Church (Disciples of Christ) in Troy. In addition to supporting Christian charities, she was strongly devoted to animal welfare and rescue organizations. Vera is survived by her husband of 64 years, Kenneth Shafer. Friends will be received from 4:00 p.m. to 8:00 p.m. on Monday, October 12, 2015, at the KEMPER-MILLARD-KEIM FAMILY FUNERAL HOME/TROY CHAPEL. Funeral service will be held at 10:30 a.m. on Tuesday, October 13, 2015 at the First Christian Church, located at 1302 Boone Street, Troy, MO 63379. Interment will be held at the Troy City Cemetery. In lieu of flowers expressions of sympathy may be made to the Heartland Humane Society or First Christian Church with a designation directing your contribution to the Vera Shafer Ministry Fund. Arrangements are under the direction of KEMPER-MILLARD-KEIM Family Funeral Chapel; P.O. Box 222; Troy, MO 63379. Online condolences may be made at www.kempermillardkeimfamilychapels.com Ph.(636) 528-8221

Vera Ellen Rudolph was born in Chicago, Illinois on August 24, 1930. She was the daughter of Charles Boehning Rudolph and Ruth Harrison Rudolph, who were long-time residents of Troy and who preceded her in death. She had two sisters, Marion... View Obituary & Service Information

The family of Vera E. Shafer created this Life Tributes page to make it easy to share your memories.

Vera Ellen Rudolph was born in Chicago, Illinois on August 24,...

Send flowers to the Shafer family.