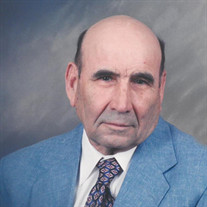 Vernon Theodore Tipp, 94, of Warrenton, Missouri, passed away surrounded by his family on Wednesday, April 14, 2021 at his residence in Warrenton, Missouri. He was born on July 28, 1926 in Florissant, Missouri, the son of the late Henry Gerhard... View Obituary & Service Information

The family of Vernon Theodore Tipp created this Life Tributes page to make it easy to share your memories.

Send flowers to the Tipp family.