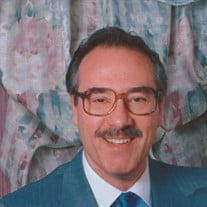 Wilford “Ray” Allen, Jr. 71, of Troy, Missouri, passed away on Thursday, June 4, 2015 at his residence. He was born November 30, 1943 in St. Louis, a son of the late Wilford Ray and Glenda (McAllister) Allen. Ray was united in marriage to Ruthene (Mitchell) Breckle on April 4, 1970 in Arnold, Missouri. After receiving his diploma, he entered the U.S. Army in 1966 and was honorably discharged from the Army Reserves in 1971. Ray retired after 37 ½ years of employment from Cenveo Inc. in O’Fallon, MO. He enjoyed wood working, reading and yard work. Ray loved camping and traveling with his family. Ray and Ruthene traveled to various places and went on 8 cruises, with the last one being Hawaii. He is survived by his loving wife of 45 years, Ruthene Allen of Troy; children: Carolyn Thompson and husband Mark of Nixa and Michael Breckle of Jefferson City; one brother, Willard Allen and wife Charlotte of New Melle; five grandchildren: Christopher Johnmeyer, Kelly Rust, Joshua Johnmeyer, Nicole Azdell and Adrian Harris; ten great-grandchildren; nieces, nephews, special friends, Neal and Susan Mudge and very special friend, Macey Mudge. He was preceded in death by his parents, one sister, JoAnn Campbell, one daughter-in-law, Wendy Breckle, one brother-in-law, Jerry Campbell, one sister-in-law, Pat Allen, one niece, one nephew, one great-nephew and special dog Buddy. Friends will be received from 12:00 p.m. to 2:00 p.m. on Sunday, June 7, 2015 at KEMPER-MILLARD-KEIM Family Funeral Home/TROY Chapel, located at 351 Monroe Street Troy, MO 63379. Funeral service will be held at 2:00 p.m. on Sunday, June 7, 2015 at KEMPER-MILLARD-KEIM Family Funeral Home/TROY Chapel. Interment will be held with full military honors at 2:00 p.m. on Monday, June 8, 2015 at the Veterans Memorial Cemetery in Mountain View, Missouri. Expressions of sympathy may be made to the Humane Society under the direction of Kemper-Millard-Keim Family Funeral Chapels P.O. Box 222 Troy, MO 63379. Online condolences may be made at www.kempermillardkeimfamilychapels.com (636) 528-8221.

The family of Wilford "Ray" Allen Jr. created this Life Tributes page to make it easy to share your memories.