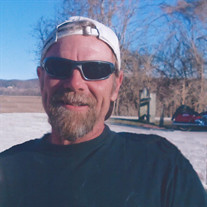 William “Bill” Solomon Horstman, 52, of Foley, Missouri, passed away on Tuesday, April 28, 2015 in Foley. He was born on October 22, 1962 in Sullivan, Missouri, the son of Fred and Juanita (Licklider) Horstman. Bill graduated from Montgomery High School in 1981. He worked various jobs as a Heavy Equipment Operator for 35 years. He was a member of the Operating Engineers Local 513. Bill enjoyed deer and turkey hunting and fishing with his family. He loved spending time with his family, especially his grandchildren and riding his Harley Davidson Road King. Bill’s sense of humor will be missed. He is survived by his children, Jennifer Noyes (James, Sr.) of Troy, Jacqueline Horstman (Lorne Lockhart) of Warrenton, Brent Horstman of Warrenton and William Horstman of Warrenton; father and mother, Fred and Juanita Horstman of Foley; one sister, Sheryl Schwartz (Donnie) of Foley; one brother, Randy Horstman (Wendy) of St. Charles; one step-daughter, Haley Hovis of Warrenton; three grandchildren, Brandon Lockhart, Jaylynn Noyes and James Noyes, Jr.; one step-granddaughter, Amirah; nieces, nephews, cousins, numerous relatives and friends. He was preceded in death by one infant son, Brandon Horstman. A memorial service will be held at 1:00 p.m. on Saturday, May 2, 2015 at the Asbury United Methodist Church located at 2241 Missouri W Foley, MO 63347. Officiating the service will be Pastor Mark Payne and Pastor Karla Cunningham. Expressions of sympathy may be made to The Family of Bill S. Horstman, in care of Kemper-Millard-Keim Family Funeral Chapel; P.O. Box 222, Troy, MO 63379. Online condolences may be made at www.kempermillardkeimfamilychapels.com Ph.(636) 528-8221

The family of William "Bill" Solomon Horstman created this Life Tributes page to make it easy to share your memories.

Send flowers to the Horstman family.