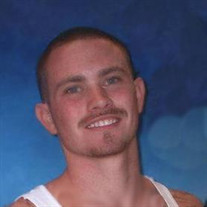 William “Billy” Russell McMahan, 26, of Winfield, Missouri, passed away unexpectedly on Saturday, June 13, 2015 in St. Charles County. He was born on August 16, 1988 in St. Charles, the son of William “Bill” Lee McMahan and Diane Lynn Westcott. Billy attended Troy Buchanan High School and worked for various Concrete Companies as a Laborer. He had a passion for motorcycles and cars, especially his ’77, ’78 and 2010 Camaro’s. Billy enjoyed 4-wheelin’ and had a need for speed when he was behind the wheel. He loved spending time with his family and friends that he cherished. His contagious smile will be deeply missed. He is survived by his mother, Diane Gress and husband, Mike of Bella Vista, AR; his father, William “Bill” McMahan of Booneville, MS; two sisters and one brother, Amber Hance and husband, Christopher of Winfield, Pricilla and Seth McMahan both of Booneville, MS; step-siblings, Amber Volzke and husband, Devin of Loveland, CO, Matthew and Cheyenne Kowalczyk both of St. Charles; maternal grandmother, Jacqueline Westcott of Mission, TX; paternal grandparents, Betty and Harold McMahan of Booneville, MS; three nieces, Miranda Monarco, Annmarie Hance and Heidi Hance; three nephews, Geoffrey Monarco, Joseph McMahan and Liam Volzke; grandfather, Jim C. Duncan of Troy; aunts, uncles, numerous relatives and many friends. He was preceded in death by his brother, David Scott, maternal grandfather, Harvey Westcott and step-brother, Gary Gress. Family and friends will be received from 4:00 p.m. to 7:00 p.m. on Wednesday, June 17, 2015 at KEMPER-MILLARD-KEIM FAMILY FUNERAL HOME/ TROY CHAPEL. Funeral service will be held at 7:00 p.m. at the Chapel. Interment will be held private for the family at the Troy City Cemetery. Expressions of sympathy may be made to The Family of William “Billy” Russell McMahan in care of Kemper-Millard-Keim Family Funeral Chapel; P.O. Box 222, Troy, MO 63379. Online condolences may be made at www.kempermillardkeimfamilychapels.com Ph.(636) 528-8221

The family of William "Billy" Russell McMahan created this Life Tributes page to make it easy to share your memories.

Send flowers to the McMahan family.