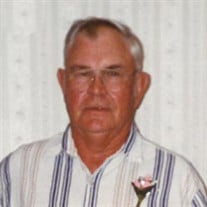 William “Bill” R. Fowler, 83, of Troy, Missouri, passed away on August 19, 2019 at Mercy Hospital Lincoln in Troy, Missouri. He was born April 2, 1936 in Warren County, Missouri the son of the late Roy and Elizabeth (Dyer) Fowler. He was united in marriage to Beverly (Rickelman) Malone on July 17, 1971 in St. Charles, Missouri. Bill worked for many years as a concrete worker with Cokley Concrete and later was a bus driver for the Troy R-III School District. He spent many hours tending his cows and farming. He enjoyed fishing, traveling and spending time with his family. He is survived by his loving wife, Beverly Fowler of Troy, MO; three sons and two daughters: Mark Fowler of New Melle, MO, Catherine Miller (Jim) of Silex, MO, Thomas Malone of Pompano Beach, FL, Paul Malone (Cindy) of Troy, MO and Ann Blankenship (Clint) of Troy, MO; he was “Grandpa Bill” to several and a friend to many. He was preceded in death by his parents and one son, David Malone. Family and friends will be received from 4:00 p.m. to 8:00 p.m. on Thursday, August 22, 2019 at KEMPER-MILLARD-KEIM Family Funeral Chapel, located at 351 Monroe Street Troy, MO 63379. Funeral service will be held at 11:00 a.m. on Friday, August 23, 2019 at the KEMPER-MILLARD-KEIM Family Funeral Chapel located in Troy, MO. Interment will be held at the Troy City Cemetery. In lieu of flowers expressions of sympathy may be made to Multiple System Atrophy Coalition in care of KEMPER-MILLARD-KEIM Family Funeral Chapel; P.O. Box 222, Troy, MO 63379. Online condolences may be made at www.kempermillardkeimfamilyfuneralchapel.com Ph.(636) 528-8221

The family of William "Bill" R. Fowler created this Life Tributes page to make it easy to share your memories.

Send flowers to the Fowler family.