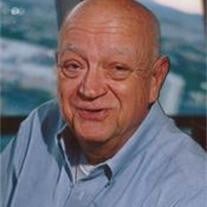 William Lee “Bill” Strawhun, 80 of Moscow Mills, Missouri and formerly of Newburg, Missouri, passed away Friday, November 8, 2013 at St. Joseph Hospital West in Lake St. Louis, Missouri. The son of William Marion and Alma Chloe (Johnson) Strawhun, he was born February 7, 1933 in St. Louis, Missouri. On September 24, 1955 at St. Louis, Missouri, he married Mary Ann Silhavy, who survives. Also surviving him are: one daughter, Jan Shore and husband, David of Rolla, Missouri; two sons, Lee Strawhun and wife, Beth of Cincinnati, Ohio and Greg Strawhun and wife, Janis of Moscow Mills, Missouri; nine grandchildren, Sara Strawhun, David Strawhun, Cory Standridge and husband, Lee, Andy Kuhljuergen and wife, Casey, Katie Mulia and husband, Joe, Arielle Spivey and husband, Gene, Ali Strawhun, Kaylee Strawhun and Emilie Strawhun; and three great-grandchildren, Tyler Standridge, Gene Kuhljuergen and Madelyn Mulia. Bill was a 1951 graduate of Southwest High School in St. Louis. He was a 1953 graduate of Harris Teachers College and a 1956 graduate of Worsham College of Mortuary Science in Chicago, Illinois. He served in the U.S. Army from 1954-56, primarily in France. He was the owner/operator of Johnson Funeral Home and Hardware Store in Newburg, Missouri for many years. He also operated the Phelps County Private Ambulance. During the time he lived on ThoxRock Farms, he had a cattle and hog operation. He was also involved in commercially raising rabbits, catfish, tomatoes and gladiolas. He was the first person in the state of Missouri to use hydroponics on commercially produced plants. After leaving the funeral home, he stayed involved in his chosen profession as a sales rep for Royal Bond Funeral Supply and later for Embalmers Supply Co. He further continued service to his profession as salesman and trainer for a prearranged funeral business. He was a member of the V.F.W., American Legion, Newburg Lodge A.F. and A.M., Newburg Chapter O.E.S. and was a past Worthy Patron, Lion’s Club, Missouri Funeral Directors’ Association and the National Funeral Directors’ Association. He served on the Newburg R-2 School Board, the Phelps County School Board, and was secretary for the Phelps County Regional Medical Center Board. He was active and coached with Khoury League Baseball, ran the clock for Newburg school basketball games and was an avid sports fan. He and Mary Ann enjoyed many years with the Little Piney Squaredance Club. He had been a member of the the Newburg United Methodist Church and Rolla First United Methodist Church and at the time of his death was a member of the St. Stephen United Methodist Church in Troy. Friends will be received from 4:00 p.m. to 7:00 p.m. on Sunday, November 10, 2013 at KEMPER-MARSH-MILLARD Family Funeral Home / Troy Chapel. Funeral service will be held at 10:30 a.m. on Monday, November 11, 2013 at St. Stephen United Methodist Church, located at 101 St Stephen Lane, Troy, MO 63379. An additional visitation will be held from 10:00 a.m. to 1:00 p.m. on Tuesday, November 12, 2013 at the Rolla First United Methodist Church in Rolla, Missouri (803 N Main St, Rolla, MO 65401). Interment will be held in the Rolla Cemetery with full military honors. Expressions of sympathy may be made to Wounded Warriors and St. Stephen Hospitality Team. In care of Kemper-Marsh-Millard Family Funeral Chapel; P.O. Box 222, Troy, MO 63379. Online condolences may be made at www.kempermarshmillardfamilychapels.com Ph.(636) 528-8221

The family of William Lee Strawhun created this Life Tributes page to make it easy to share your memories.