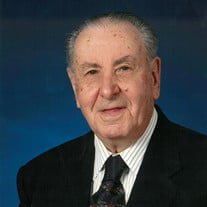 William Edward Newberry, 97, of Troy, Missouri, passed away peacefully with family present on June 15, 2019. He was born on August 26, 1921 in Pocahontas, Arkansas, the son of the late William C. and Ollie G. (Lofton) Newberry. The family moved to Dodge City, Kansas in 1934. Ed was educated in the Dodge City school system and enlisted in the Navy in 1942. He served four years of duty with Motor Torpedo Boat Squadron in 18 in the South Pacific and on two heavy cruisers, the USS Raleigh and USS Portsmouth in the Atlantic. After discharge from the service he graduated from Kansas State University, Manhattan Kansas, in 1952 with a Bachelor of Science Degree, a Doctor of Veterinary Medicine and Captain in the Army Veterinary Corps Reserves. In 1952 Dr. Newberry came to Troy, Missouri to practice Veterinary Medicine with Dr. R.S. Johnson. He retired in 1983. Dr. Newberry was a lifetime member of the American Veterinary Medical Association and the Missouri Veterinary Medical Association. While in practice he served as chairman of the Missouri Equine Committee, a speaker at the Missouri Veterinary Medical Association meetings and a speaker at the American Veterinary Medical Association meetings. Dr. Newberry developed a veterinary surgical instrument that is produced commercially. He was coroner of Lincoln County Missouri for four years, 1972-1976. In the past he worked with scouts and 4-H at his Hillcrest Farm to encourage interest in horses. He bred, trained and showed American Saddlebred horses for 45 years, showing many champions at the Missouri, Illinois and Iowa State Fairs and the American Royal in Kansas City and the St. Louis National, in addition to many county fairs in the area. He bred, trained and showed one horse that later became a world champion and also sold mares that produced 5 world champions. He was a member of the Missouri Saddlebred Breeders Association. He was a member of the Kiwanis club for 10 years and a loyal member of the VFW. In his younger years he raised pointer and setter bird dogs and judged many bird dogs field trials. Upon retirement he continued raising and showing Saddlebreds, enjoyed traveling, working a large summer garden and sharing the produce. He always helped youngsters interested in horses and veterinary medicine. He is survived by his loving wife of 73 years, Frances M. (Maher) Newberry of Warwick, Rhode Island. To this marriage were born 5 children: J. Stephen Newberry (Vicki) of Troy, MO, Michael E. Newberry (Cheri) of Katy, TX, Lynn L. Newberry Powell (Rex) of Stroudsburg, PA, Catherine A. Newberry of Springfield, MO and Christopher W. Newberry (Sherri) of Dexter, MO; eight grandchildren and six great-grandchildren, one sister, Geraldine Jackson of Baytown, TX, numerous nieces, nephews. He was preceded in death by his parents, two brothers, Keet and Fred Newberry and three sisters: Ova Bryant, Pearl Tapp and Dovie Hedgepeth. Family and friends will be received from 11:00 a.m. to 1:00 p.m. on Friday, June 21, 2019 at the KEMPER-MILLARD-KEIM Family Funeral Chapel located at 351 Monroe Street Troy, MO 63379. Funeral service will be held at 1:00 p.m. on Friday, Friday, June 21, 2019 at the KEMPER-MILLARD-KEIM Family Funeral Chapel located at 351 Monroe Street Troy, MO 63379. Private interment will be held at Sacred Heart Catholic Cemetery. In lieu of flowers, expressions of sympathy may be made to Powell Memorial Library or Central Missouri Honor Flight in care of Kemper-Millard-Keim Family Funeral Chapel, P.O. Box 222 Troy, MO 63379. Arrangements are under the direction of Kemper-Millard-Keim Family Funeral Chapel; 351 Monroe Street Troy, MO 63379. Online condolences may be made at www.kempermillardkeimfamilyfuneralchapel.com Phone 636-528-8221.

William Edward Newberry, 97, of Troy, Missouri, passed away peacefully with family present on June 15, 2019. He was born on August 26, 1921 in Pocahontas, Arkansas, the son of the late William C. and Ollie G. (Lofton) Newberry. The family... View Obituary & Service Information

The family of William Edward Newberry created this Life Tributes page to make it easy to share your memories.

Send flowers to the Newberry family.