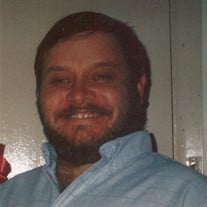 William “Bill” Zengel, 59, of Troy, Missouri, passed away on Wednesday, July 9, 2014 at the Missouri Baptist Hospital. He was born on September 7, 1954 in St. Louis, Missouri, a son of the late Carl J. and Jeanne M. (Perricone) Johnson. Bill attended graduated in 1972 from Moon Valley High School in Phoenix, Arizona and he continued his education as a Mechanical Technician. He retired as a customer service representative. Bill loved Civil War Reenactment and he participated in the 9th Missouri Reenactment. He enjoyed listening to talk radio, watching movies and cooking. Bill was a very simple man, who never knew a stranger and would do anything for others. Bill is survived by his two sisters, Regina Zengel of Troy, Missouri and Deborah Zengel of Troy, Missouri; one brother, Chris of Ballwin, Missouri; nieces and nephews, Daniel Zengel, Cayley Zengel, Maxx Zengel and Lane Zengel; He was preceded in death by his parents and one sister-in-law, Jackie Zengel. A celebration of life will be held at 2:00 p.m. on Sunday, July 20, 2014 at the Troy City Park. In lieu of flowers expressions of sympathy may be made to The Family of William Zengel. In care of Kemper-Marsh-Millard Family Funeral Chapel; P.O. Box 222, Troy, MO 63379. Online condolences may be made at www.kempermarshmillardfamilychapels.com Ph.(636) 528-8221

The family of William Joseph Zengel created this Life Tributes page to make it easy to share your memories.

Send flowers to the Zengel family.